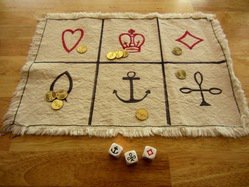 While it isn't very well known by many people at all, there is a Vietnamese dice game known as Bầu Cua Cá Cọp that is ever so slowly gaining popularity in gambling circles around the world, you can play it here at vietnamcasino.org site. It is sometimes referred to as Crown and Anchor and is also similar to a Chinese game known as Hoo Hey How.

Bầu Cua Cá Cọp is a game in which two or more individuals sit at a table with a dealer and place wagers based upon the symbols that are shown. Aside from traditional playing card symbols like Hearts, Diamonds, Spades and Clubs, there is also a Crown and an Anchor symbol which give this title its name. The three dice that are used all have the same symbols - one on each side - and are tossed by one of the people seated at the table. Then, the dealer (or the croupier in some establishments) pays all winning wagers,always go for Best bonus codes online.

The ways in which an individual wins at Bầu Cua Cá Cọp is actually quite simple to understand. There are three dice, so if a bettor matches one symbol, he or she receives a payout of 1:1. Similarly, if two are matched, the payout is 2:1. Finally, if all three show up, he or she receives 3:1. People generally avoid the game because the payouts are quite small for the risk involved, but it can still be quite a bit of fun same with blackjack online game.

The Vietnamese version is carried out in exactly the same way with the only exception resting in the symbols. On these dice, they are a prawn, a rooster, a stag, a crab, a goldfish and a crab. In the Chinese version, Hoo Hey How, users will see crabs, prawns, luck symbols, roosters, gourds and carp, which is a type of fish. Other versions exist, too, such as the one in Malaysia in which a tiger is used instead of a crab.

The actual way in which the dice are tossed and payouts are handled depends primarily on the location of the casino popular among chinese gamblers. Some venues in some countries require the use of a cup while others allow participants to toss them with their hands.